How brillea achieved a 5x return on ad spend for Made For Drink and turned direct into their largest sales channel.

Made For Drink are a small family business with the humble ambition of making the world's best bar snacks. They believe in the power of food and drink to bring people together and create real, human connection.

As a provider of premium bar snacks, Made For Drink’s main route to market was naturally up market pubs & bars. However when the Covid pandemic took hold and the nation went into lockdown, their primary sales channel disappeared over night. So like lots of other businesses, Made For Drink used brillea to explore the opportunity of selling direct to consumers through their new Shopify web store. This was their first proper venture into paid social advertising and they had no idea what to expect.

Like lots of brillea’s customers, Made For Drink started quite cautiously with an ad spend of £1,000 a month. They liked the fact they weren’t tied into brillea and could stop at the end of the first month if things didn’t go well. At the end of the first month, Made For Drink broke even on their ad spend and decided to test a further month. At the end of the second month, the results had not significantly changed. At this stage there were conversations on whether it was really worth continuing on brillea as it was only just breaking even. However they wisely decided to give it one more month. In month 3 the magic started to happen. The Facebook algorithm started to kick and the target audiences and creative ads we had tested in the first 2 months started to payback. The return on ad spend increased to 3 times and started generating healthy sales and revenue. Even the people being targeted with the ads seemed to respond positively. 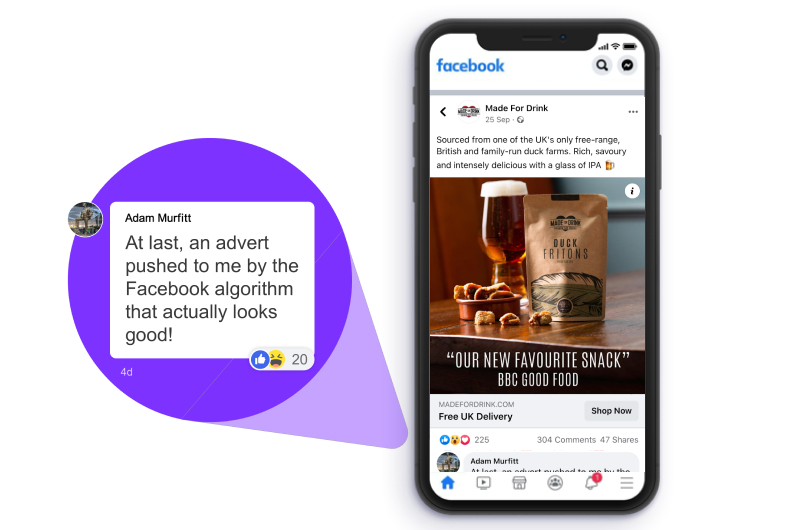 As a result, Made For Drink started to increase their ad spend over subsequent months and as the sales increased, got to a level that their webstore became their primary sales channel. This helped secure a more certain future for the brand in difficult times.

After 4 months Made For Drink enjoyed a return on ad spend of 5x. They also ended up increasing their initial ad spend by > 10x on the run up to Christmas. This was only capped as they actually ran out of their popular duck scratchings.

Want to help your business grow? Sign up and keep up to date with the latest from brillea

Send my marketing tips and tricks email to: